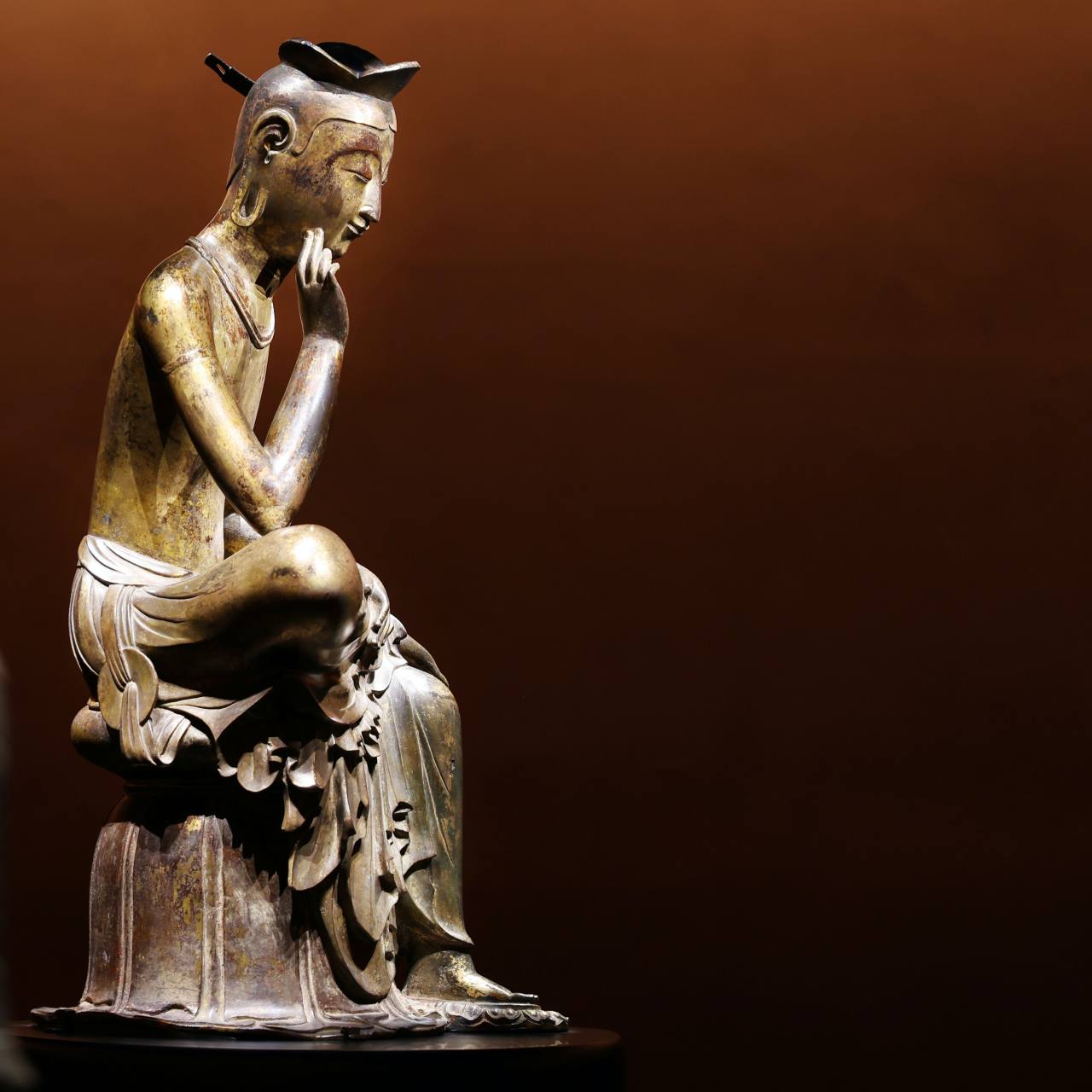 The Gilt-bronze Maitreya in Meditation is on display at the National Museum of Korea in Seoul.

For the past 100 years, researchers have been speculating on the meaning of the smile on National Treasure No. 83, the Gilt-bronze Maitreya in Meditation, a statue of what is believed to be the future Buddha, known as “Mireuk” in Korean.

The gilt-bronze statue of a young future Buddha in a contemplative state is considered the epitome of Buddhist artwork.

The beauty, the gentleness and the peaceful smile of the gilt-bronze Maitreya in Mediation, known as the Bangasayusang Mireuk statue, is a physical expression of the state of enlightenment.

In Korean Buddhism, the Mireuk faith has been very popular from the time of its introduction. 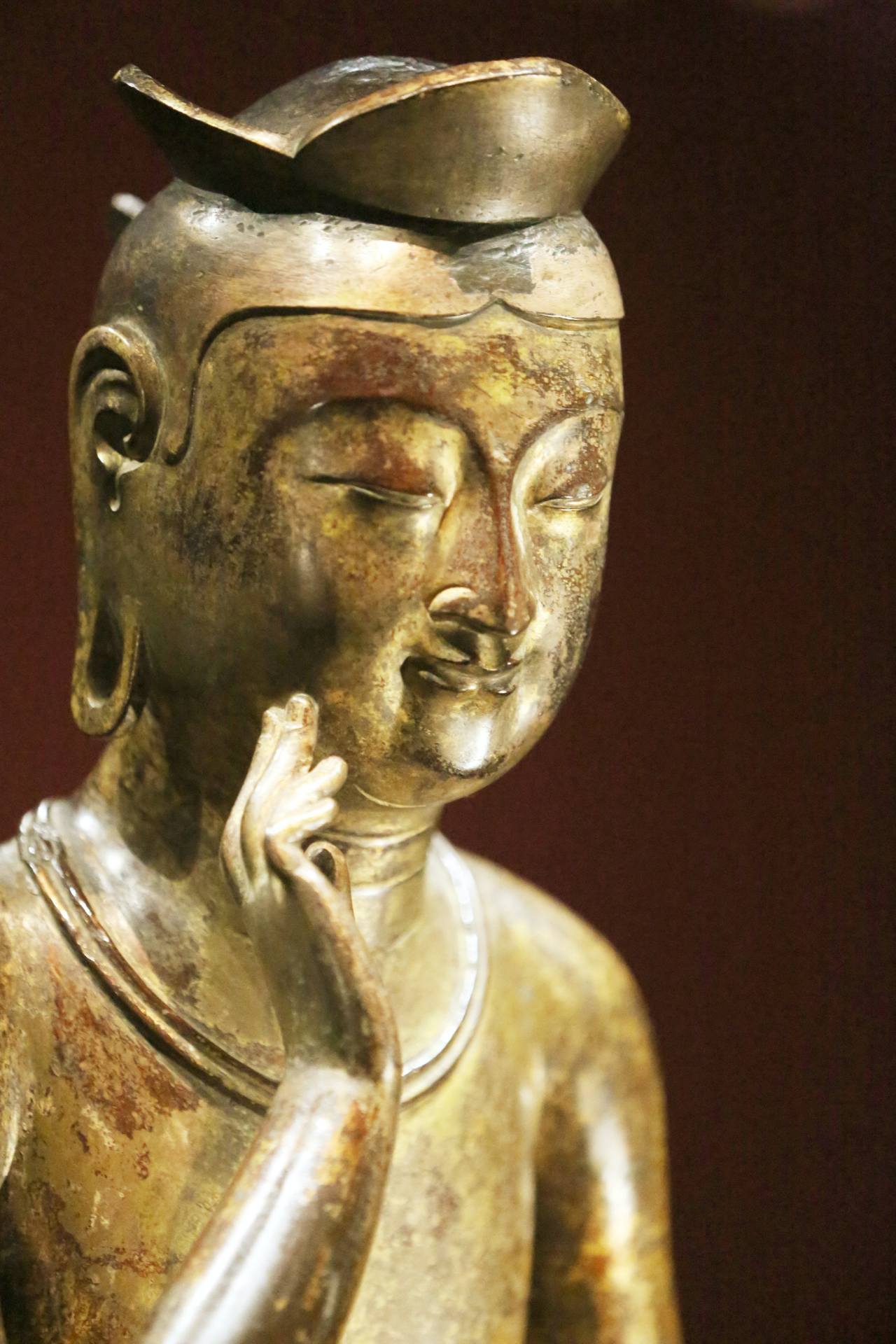 The Gilt-bronze Maitreya in Meditation is on display at the National Museum of Korea in Seoul.

Mainstream Buddhism places the Siddhartha Gautama, the Lord Buddha Shakyamuni who was born royalty in the Himalayas, as the top-down example of the enlightened one.

For Koreans, to know that the future Buddha, Mireuk, can emerge from this land gave a bottom-up perspective, drawing intense attraction to the Mireuk faith.

In Buddhism, which has no absolute deity, anyone who reaches enlightenment can be a future Buddha.

The Maitreya faith was an immensely popular form of Buddhism at times of unending wars, such as when the Silla Kingdom was fighting for the unification of the peninsula, eventually defeating Baekje in 663 and Goguryeo in 668.

In times of war and uncertainties, heroes are called for and Hwarang, an elite youth brigade, stepped up.

Scholars believe that the Hwarang personified the Maitreya during this tumultuous period of Silla.

Hwarang hailed from the upper caste in Silla, who lived with the conviction that “Hwarang never waivers in battles.” They willingly died for the country and their family’s honor.

Hwarang was the personification of youth, vigor and hope for the future and the Hwarang-do — “do” meaning a group of friends or colleagues — was instrumental in winning battles.

Silla’s most famous Hwarang, Gen. Kim Yu-sin, was from the Gaya aristocracy, who had achieved upward social mobility by joining the Silla’s Jingol caste, the top aristocracy below the royal bloodline Seonggol, which became extinct after Queen Jindeok’s reign from 647 to 654.

In Silla, where the state religion was Buddhism, it was common for even kings and queens to become Buddhist monks and nuns.

Some scholars suggest that the royal families wanted to believe one of their family members was a Mireuk, just as the Lord Buddha Shakyamuni was royalty.

“In fact, the Mireuk faith gave hope and the basis for all future generations’ revolts,” said the Ven. Jibong of the temple Yonghwasa in Yeongcheon, North Gyeongsang Province. The word “Yonghwa” comes from the Yonghwasu, the Tamanu tree under which Maitreya, the future Buddha, sat, waiting to save everyone not saved by the Lord Buddha Shakyamuni.

Farmer rebellions and the rise of the Donghak religion, which believed in egalitarianism and the fundamental equality of everyone, spread like wildfire among peasants and slaves oppressed by nobles in the 18th century.

Koreans’ intolerance of aristocracy today can trace its origin to the Mireuk faith, which said “the future Buddha will emerge from one of us and anyone can achieve upward social mobility through extreme self-discipline and study,” said the Ven. Jibong.

The masterpiece Gilt-bronze Maitreya in Meditation “appeared” suddenly in 1920, its origin largely unknown, like many other Korean treasures that became marketable with increasing demand stoked by Japanese collectors.

What scholars agree on is that it was made during the seventh century, either in Baekje or Silla.

Japan’s National Treasure No. 1 Miroku Bosatsu in half-lotus position, a wooden sculpture of a Maitreya in Meditation, was sent as a gift to Japan from Silla in 623, according to Japanese historical records. 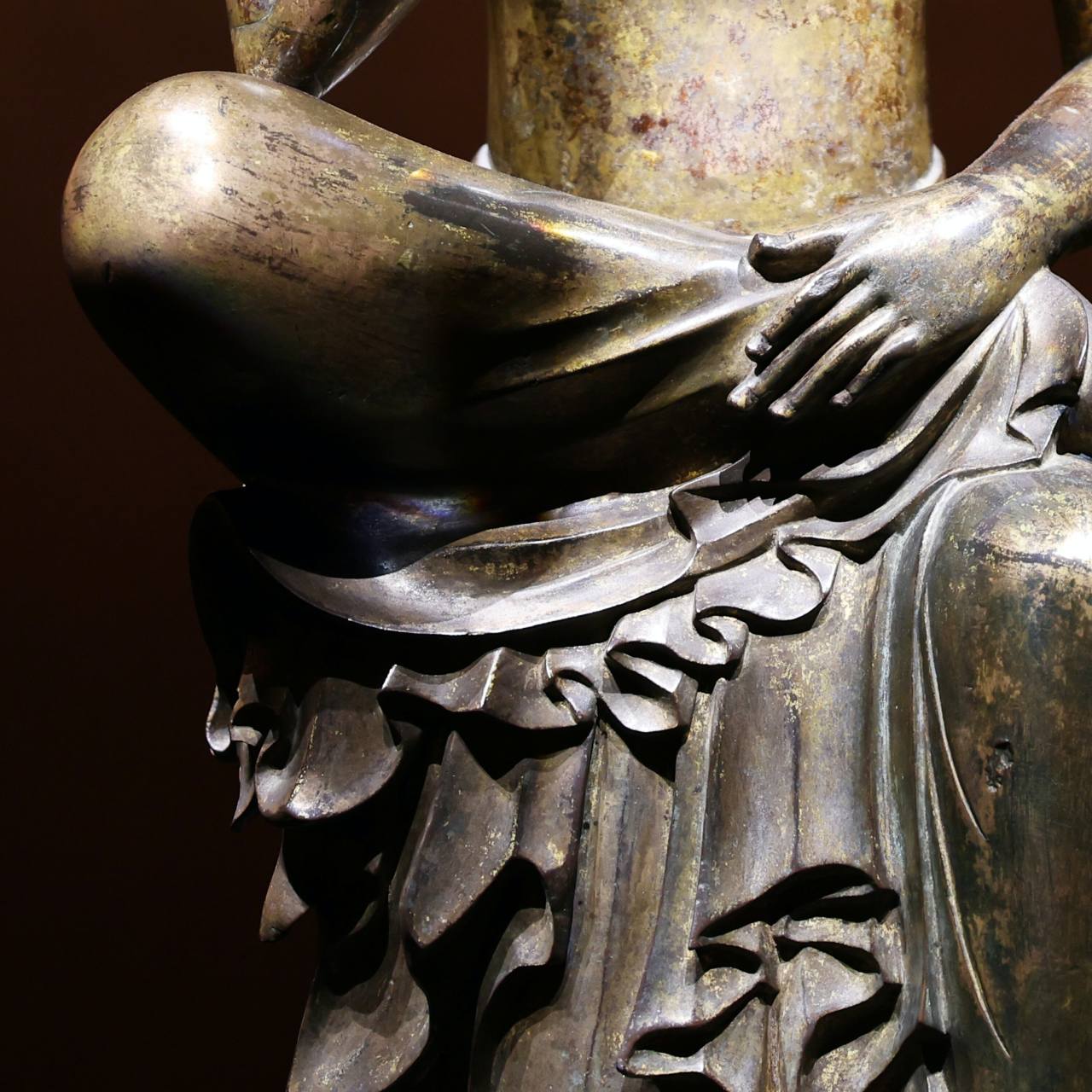 A detailed view shows the left hand and draping skirt of the Gilt-bronze Maitreya in Meditation on display at the National Museum of Korea in Seoul.

Unlike traditional and popular wooden sculptures that are carved in many pieces and assembled at the end, the National Treasure No. 1 is made from a whole piece of Korean red pine, which grows in today’s North Gyeongsang Province, a former Silla territory.

One can speculate that the smile expressed in the Maitreya in Meditation sculpture might be an expression of a moment of enlightenment of the Hwarang warriors who willingly gave their lives for their kingdom in the seventh century.

Ditch the NyQuil. Here Are 6 Natural Sleep Aids for Insomnia

Sleep is important, but when falling asleep seems impossible, it is easy to feel frustrated, especially if you've already...

In the past few years, I have researched and written over 200 hymn stories and commentaries. And I have...

Sir, This refers to KBG’s Abracadabra titled “Swami Vivekananda’s vision for future of India, as I understand -1” in...

Noel Alumit We’re thrilled to announce that a new associate editor has joined the Lion’s Roar Foundation—Noel Alumit. His...

A&E is heading to court, live. The cable network has ordered Court Night Live, a reality series that will...